Ask of Me, and I will give You
The nations for Your inheritance,
And the ends of the earth for Your possession.
You shall break, them with a rod of iron;
You shall dash them to pieces like a potter’s vessel.

Now therefore, be wise, O kings;
Be instructed, you judges of the earth.
Serve the Lord with fear,
And rejoice with trembling.
Kiss the Son, lest He be angry,
And you perish in the way,
When His wrath is kindled but a little.
Blessed are all those who put their trust in Him. 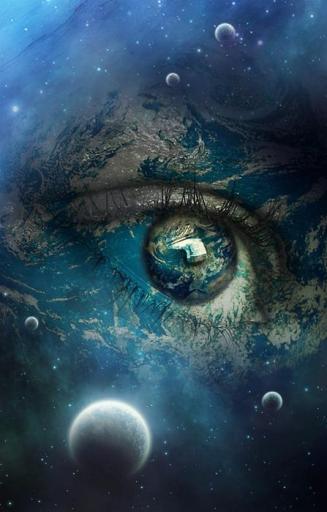 Do you ever wonder what our conversations will be like in heaven?  I mean, what will we talk about?  Will we spend eternity only talking of religious matters?

As a kid, I use to think heaven would be boring.  Don’t get me wrong, I definitely wanted to go there, because the other place (A-hem)scared the hell out of me, but I had this silly little picture in my head of floating on clouds and playing harps.  While, that would be fun for a while, especially if I could play the guitar, after a few thousand years I’m sure I’d be snoring.

Now, as an adult, I know there will be limitless topics to dissect and discuss, once we get to heaven.  For instance, I would be completely happy to spend the first ten thousand years learning of science and the universe…the planets…the stars…black holes…life on “other” planets….and on and on…

I’m a huge fan of space!  I’m also a huge fan of science, and so when I get to heaven, after I’ve hugged Jesus and spent a couple thousand years with friends and family, I want to learn everything there is to know about space!  I’ve got my fingers crossed that God will actually allow us to visit all the planets within all the universes.

Throughout the Bible, we read about many heavenly conversations.  I think it would make a fascinating study, However, my present study is taking me on a walk through the book of Psalms.  I’ve walked as far as Psalms chapter 2 and  it’s in this chapter I hear a conversation between God the Father and his Son, Jesus.  Now, of course, historically, this passage is in reference to King David and his rule over the children of Israel;  but prophetically, it is about a heavenly conversation-waiting to occur between God and his Son.  It will play out something like this:

God the Father is in heaven sitting upon his throne, and Jesus, the son, is seated by his side.

Looking down from heaven they survey a scene taking place within a valley called            Armageddon.  Psalms 2:1 states that all the evil kings have gathered their armies with the         intent to wage a war against God.  In essence, the scene portrays the last battle between good and evil.   The evil kings are confident they will when this battle because the devil and the beast (Antichrist)(the devil’s “son”) are fighting for them.  The devil’s army is in an uproar, and they rage, perhaps, like a roaring lion, pacing back and forth, taunting God to send them his son, Jesus.

Observing the rant, God, the Father, says to Jesus,

“Ask of Me, and I will assuredly give [You] the nations as Your inheritance, and the ends of the earth as Your Possession…You shall break them with a rod of iron, You shall shatter them [in pieces] like earthenware (pottery).”

How does Jesus answer his Father?

Well, we don’t know because, as recorded here in Psalms, the conversation ends, without Jesus giving his answer.  Lucky for us, this same scene can be found the book of Revelations.

In Revelations 16:16 the story continues as, John, the writer, takes up where Psalms left off:

The Father and the Son are right where we left them in Psalms.  God is on his throne and Jesus, seated beside, has just heard his Father’s proposition.  [Psalms 2:8-9]

“…the evil spirits gathered the rulers together to the place that in Hebrew is called Armageddon.”

Then I [John] saw heaven open…

“There before me was a white horse.  The rider on the horse was called Faithful and True [Jesus]  He was dressed in a robe dipped in blood and was called the Word of God [Jesus].  A sharp sword came out of the rider’s mouth, a sword that he would use to defeat the nations.  And he will rule the nations with a rod of iron.”

And so, according to John, Jesus accepts his Father’s proposition by descending from heaven on a white horse to face and to fight the devil and evil.  John continues the story:

In the end, the war is won by Jesus and all the fowls of the air are invited to feast upon the dead bodies.  Quite a bloody picture, John paints!  Will the last battle between good and evil play out as such?  Well, you have to remember that visions and dreams are full of imagery, but God, always…always…has an important truth he wants us learn.

So what can we take from this vision, God has allowed us to witness?  Several things:

I believe the message of King David and John, the Revelator.   I believe God will do what he promises.  However, in-the-mean-time, we live in a world where  evil, often, trumps good.

When I see, hear and even experience the hurts of such injustice I have to cling to the words of the Psalmist to keep my sanity.  For sanity’s sake, I  have to believe the words of John that Jesus will bring peace.

Even if it be but one…at least that one will be better from having known us.

My prayer:  Lord, the armies of hate have gathered and they seek to bring hurt to us and to so many others.  Our hearts are broken and sometimes we fall to our knees in the despair. Please fill us with the very spirit of Jesus so we can stand and so we can be Jesus to all that are hurting. Thank you that one day you will bring everlasting peace.  Lord, hasten that day.  Amen.