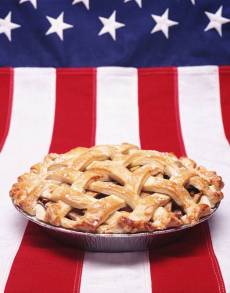 As American As Apple Pie

Today I peeled six diverse apples, cored them and thinly sliced the flesh.  Diversity is quite important to me and so when I whipped up an apple pie today it consisted of Fuji, red and yellow delicious and a lovely pink lady stripped and thrown into the mix.  Lest you think I purposely buy such a miscellaneous assortment for the sole reason of baking pie let me clarify that these apples were simply the left over ones.  The ones I had failed to eat over past week or so.  I love a good crisp apple but when they’ve become too mellow they are usually thrown out.  Luckily for this hodgepodge, Thanksgiving visited and so they were spared the fate of the trashcan.   After slicing and dicing they enjoyed a splash of lemon and then became bosom buddies with flour, butter, sugar, cinnamon and a sprinkling of nutmeg.  Pillsbury pie dough enveloped the mixture and after an hour sleep in a hot oven an All American Apple Pie graced my granite counter top.

The aroma within the Hardy/Replogle household was so yummy and thick I toyed with the idea of cutting a slice of air and giving it a taste.  At that thought I actually laughed out loud and scratched my head wishing it were possible because I felt confident the caloric intake would be far less.  Then a random question interrupted my hilarity:  Why is it that the nationality of apple pie is considered All-American?   After a bit of detective work I learned the earliest settlers/pilgrims brought apple spurs with them across the big blue ocean.   These spurs were planted and cultivated and perhaps with the help of one, Johnny Appleseed, (definitely another Google search) the New World became rich in apples.  Cooking the apples in a crust originated because it was an economical and sustainable way to feed many hungry mouths.  Also making crust used less flour than baking bread which helped to conserve their limited supply.    The crust at that time was considered more of a convenient means of transportation for whatever was cooked inside.  The crust was often thick and tough for our pilgrim ancestors.    Later, butter was introduced by French immigrants and the apple pie eventually evolved to the scrumptious flaky desert we enjoy today.

I agree apple pie is all American.  After all what does it mean to be an American?  Americans are indeed as diverse as the apples I sliced today for my pie.   Some are Fuji, some are Gala, some are red and some are yellow but they all belong to the apple family.   People are small, medium, large, black, red, yellow and white.  Some are Christians others are Jewish, Muslim, Wiccan, Agnostic or Atheist but we all belong to the American family.  We are sliced and diced and tossed about and like crust of a pie we all are enveloped by the boundaries of our beautiful country.  So today when I slice my pie and scoop up a fork full I will silently wish EVERYONE peace and the happiest of holidays!